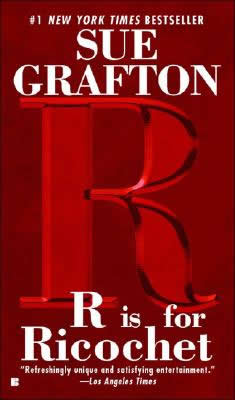 "R" is for Ricochet

Reba Lafferty was a daughter of privilege, the only child of an adoring father. Nord Lafferty was already in his fifties when Reba was born, and he could deny her nothing. Over the years, he quietly settled her many scrapes with the law, but he wasn't there for her when she was convicted of embezzlement and sent to the California Institute for Women. Now, at thirty-two, she is about to be paroled, having served twenty-two months of a four-year sentence. Nord Lafferty wants to be sure she stays straight, stays at home and away from the drugs, the booze, the gamblers.

It seems a straightforward assignment for Kinsey: babysit Reba until she settles in, make sure she follows all the rules of her parole. Maybe a week's work. Nothing untoward—the woman seems remorseful and friendly. And the money is good.

But life is never that simple, and Reba is out of prison less than twenty-four hours when one of her old crowd comes circling round.

Readers have come to expect the unexpected from Sue Grafton, and "R" is for Ricochet is no exception. In it, a complex and clever money-laundering scheme is just a cover for a novel that is all about love: love gone wrong, love betrayed, love denied. And love avenged. For Reba Lafferty, its moral is clear; Sometimes what you hand out in life comes back to bite you in the ass. Sometimes the good guys win, even when they lose.

"Grafton keeps pulling out surprises—and pulling us in."
—Entertainment Weekly

"Grafton is brilliant, creating in Kinsey Millhone a character so fully realized and three-dimensional—not to mention fun to listen to—that we'd follow her anywhere."
—Newsday

"The central figure in Sue Grafton's long-running series conveys a verisimilitude, in both her professional and private lives, that makes most of her competitors seem like cartoons."
—The San Diego Union-Tribune

"Book by book, this may be the most satisfying mystery series going."
—The Wall Street Journal

"...Grafton, as usual, creates believable and enduring characters and a strong sense of place in her town of Santa Teresa circa 1987."
—Publishers Weekly