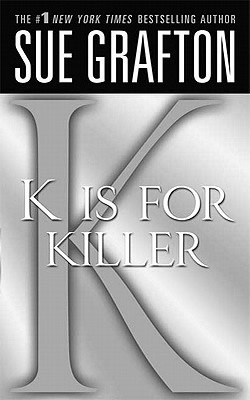 "K" is for Killer

Lorna Kepler was beautiful and willful, a loner who couldn't resist flirting with danger. Maybe that's what killed her.

Her death had raised a host of tough questions. The cops suspected homicide, but they could find neither motive nor suspect. Even the means were mysterious: Lorna's body was so badly decomposed when it was discovered that they couldn't be certain she hadn't died of natural causes. In the way of overworked cops everywhere, the case was gradually shifted to the back burner and became another unsolved file.

Only Lorna's mother kept it alive, consumed by the certainty that somebody out there had gotten away with murder.

In the ten months since her daughter's death, Janice Kepler had joined a support group, trying to come to terms with her loss and her anger. It wasn't helping. And so, leaving a session one evening and noticing a light on in the offices of Millhone Investigations, she knocked on the door.

In answering that knock, Kinsey Millhone is pulled into the netherworld of unavenged murder, where only a pact with the devil will satisfy the restless ghosts of the victims and give release to the living they have left behind.

Eleven books into the series that has won her readers around the world, Sue Grafton takes a darkside turn, pitching us into a shadow land of pain and grief where killers still walk free, unaccused, unpunished, unrepentant. With "K" is for Killer she offers a tale that is dark, complex, and deeply disturbing.

"Grafton exhibits a sharp ear for dialogue and a quarter-horse pace. Her characters are as real as any this side of Elmore Leonard. 'K' is for Killer offers further proof of Grafton's growth as a writer. This is one mystery series that gains strength with each passing letter."
—Lorenzo Carcaterm, People Magazine

"Unlike many detective series, Grafton's seems only to get better each time out. How comforting that she's got fifteen letters left to play with."
—Gene Lyons, Entertainment Weekly

'K' is for Killer is the most ambitious and perhaps the best yet of these popular 'alphabetical mysteries'...A book that takes this fine series to a new level of seriousness and accomplishment."
—Tom Nolan, Wall Street Journal