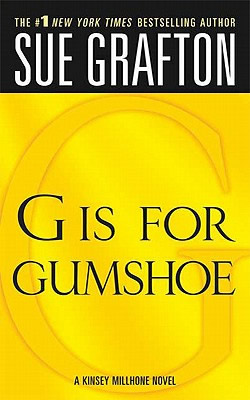 "G" is for Gumshoe

It's the fifth of May and Kinsey is celebrating her 33rd birthday. One of her presents is a call from a fellow detective warning her that she's made the hit list of Tyrone Patty (a killer she helped track down) and suggesting she hire a bodyguard. But Kinsey has better things to do with her money. Instead, she takes on her next case—tracking down her new client's eccentric mother who is missing from her trailer home on the edge of the Mojave Desert. But before she can get very far in the case, Kinsey is run off the road by a red pickup truck, wrecking her '68 Volkswagen and landing herself in the hospital.

Maybe a bodyguard is a good idea after all... Enter Robert Dietz, a burnt-out detective, "late forties, five ten, maybe 170, [who arrives in] jeans, cowboy boots, a tweed sport coat with a blue toothbrush protruding from the breast pocket like a ballpoint pen." The stage is set for "G" is for Gumshoe, in which Grafton is at her very best, revealing new dimensions to Kinsey and offering a deeply layered and twisted tale where "the body-count [is] high; the sexual encounters feverish; and the villains chilling" (Kirkus Reviews).

"[Kinsey Millhone is] one of the sassiest, most appealing of the recent spate of female gumshoes...'G' is for a glorious, galloping read and I can't wait for 'H.'"
—Cosmopolitan

"'G' is for gratifying."
—Publishers Weekly

"The sort of realistic fictional detective created by Dashiell Hammett and Raymond Chandler in the 1930s and developed by Ross Macdonald in the '50s and '60s is alive and well today in California, and one good reason is Sue Grafton."
—Philadelphia Inquirer Magazine