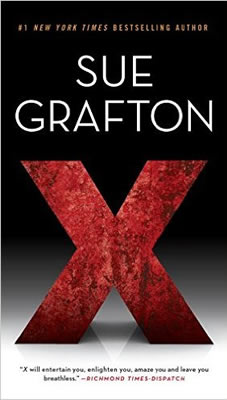 X: The number ten. An unknown quantity. A mistake. A cross. A kiss.
X: The shortest entry in Webster's Unabridged. Derived from Greek and Latin and commonly found in science, medicine, and religion. The most graphically dramatic letter. Notoriously tricky to pronounce: think xylophone.
X: The twenty-fourth letter in the English alphabet.

Sue Grafton's X: Perhaps her darkest and most chilling novel, it features a remorseless serial killer who leaves no trace of his crimes. Once again breaking the rules and establishing new paths, Grafton wastes little time identifying this sociopath. The test is whether Kinsey can prove her case against him before she becomes his next victim.

"Ratcheting up the heat as she heads toward the finish line of her alphabetically-framed series, Grafton has turned in a corker of a novel with X, upping her already high-level game..." —Boston Globe

"X - with expertly handled plotlines and cunning moral puzzles - reaffirms the author's mastery of the genre and her ability to transcend it into serious literature...'X' will entertain you, enlighten you, amaze you and leave you breathless...as the end of this spectacular series approaches." —Richmond Times-Dispatch

"Grafton's endless resourcefulness in varying her pitches in this landmark series, graced by her trademark self-deprecating humor, is one of the seven wonders of the genre." —Kirkus Reviews (starred review)

"An inventive plot and incisive character studies elevate MWA Grand Master Grafton's 24th Kinsey Millhone novel... This superior outing will remind readers why this much-loved series will be missed as the end of the alphabet approaches." —Publishers Weekly (starred review)

"[The] plotlines are woven together with expertise...But, in the end, I suspect it's not the complexities of her plots that draw readers to Ms. Grafton's work; it's the enjoyment of getting to know Millhone...[it is] a chance to spend time with a detective, as well as an author, who knows what she's about, tells a good story, and takes guff from no one." —Santa Barbara News-Press

"In her 24th addition to her alphabet series, Grafton has once again managed to bring something fresh to the table." —Library Journal

"Author Sue Grafton proves once again that she is no slacker." —Deseret News