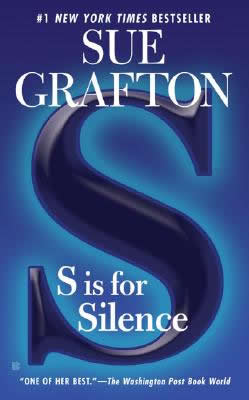 "S" is for Silence

Thirty-four years ago, Violet Sullivan put on her party finery and left for the annual Fourth of July fireworks display. She was never seen again.

In the small California town of Serena Station, tongues wagged. Some said she'd run off with a lover. Some said she was murdered by her husband.

But for the not-quite-seven-year-old daughter Daisy she left behind, Violet's absence has never been explained or forgotten.

Now, thirty-four years later, she wants the solace of closure.

In "S" is for Silence, Kinsey Millhone's nineteenth excursion into the world of suspense and misadventure, "S" is for surprises as Sue Grafton takes a whole new approach to telling the tale. And "S" is for superb: Kinsey and Grafton at their best.

"'S' is for Silence, the 19th novel in Sue Grafton's Kinsey Millhone series, is one of her best and also one in which she makes an interesting departure."
—Patrick Anderson, The Washington Post

"By alternating Kinsey's brisk first-person narrative with dramatic flashbacks that catch the spirit of the town during its volatile postwar period, Grafton allows Violet to emerge as a dynamic but dangerous life force—irresistible to men, threatening to women and too reckless for her own good."
—Marilyn Stasio, The New York Times

"Although this is the 19th entry of her popular alphabet series, Grafton has struck on another fresh tack, alternating between Kinsey's current investigation and the days leading up to Violet's disappearance as told by the people who knew her. The climax that results when the two narratives converge will leave readers breathlessly awaiting the next installment. Essential for all collections."
—Library Journal

"Grafton brings every corner of Serena Station, past and present, more deeply alive than your own hometown."
—Kirkus Reviews