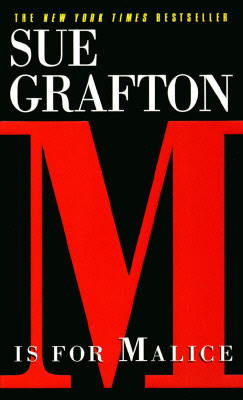 "M" is for Malice

"M" is for money. Lots of it. "M" is for Malek Construction, the $40 million company that grew out of modest soil to become one of the big three in California construction, one of the few still in family hands.

"M" is for the Malek family: four sons now nearing middle age who stand to inherit a fortune—four men with very different outlooks, temperaments, and needs, linked only by blood and money. Eighteen years ago, one of them—angry, troubled, and in trouble—went missing.

"M" is for Millhone, hired to trace that missing black sheep brother.

"M" is for memories, none of them happy. The bitter memories of an embattled family. This prodigal son will find no welcome at his family's table. "M" is for malice.

And in brutal consequence, "M" is for murder, the all-too-common outcome of familial hatreds.

"M" is for malice...and malice kills.

"One can only marvel at Grafton's seemingly endless stock of adventurous and inventive plots and hope that a finite alphabet won't limit her to just 26 mysteries."
—Emily Melton, Booklist

"Grafton's sense of plotting and timing is so assured that it overcomes a growing weariness with the character of Millhone (And, of course, it's a compliment to Grafton that she has created a character so real that she has the ability to irritate)."
—Cleveland Plain Dealer

"Atmospheric and appealing, 'M' Is for Malice' works on all levels, emotional and whodunit. We are heartened as Kinsey learns that being independent is not the same as letting go of the past."
—San Francisco Chronicle

"This is a subtle and swiftly moving novel, pleasantly unpredictable, with an agreeable overlay of smoldering romance, as fellow PI and former lover Robert Dietz reenters Kinsey's life. Grafton's heroine—more introspective, yet still feisty and surefooted—leads this finely tuned and at times electrifying tale to a thoroughly satisfying conclusion."
—Publishers Weekly